Buddha taught that all living beings have Buddha-nature, and that we shall treat them as family members and relatives. The World Buddhism Association Headquarters held a Dharma Assembly to release captive lives and pray for blessings on Buddha-Stipulated Lives-Releasing day. Presiding over the gathering was the Abbot of the Hua Zang Si Temple, Ruzun Ruohui. The congregation was jointly led through the service by the Vice Chairperson of the World Buddhism Association Headquarters, Jiaozun Zhengda, who is also the Honorable Chairperson of the International Buddhism Sangha Association, and Dharma Master Juehui, the Abbot of the Sanger Mission Bodhi Monastery. In attendance were other holy gurus, eminent monks, and monastics, helping to lead the congregation comprised of hundreds of Buddhists from around the world—the United States, Canada, Mexico, China, Japan, and Taiwan. The Dharma Assembly was held on October 29th, 2022 in the inner bay of Marina Del Ray, California.

On October 29th, 2009, after completing a wonderful Buddhist activity, H.H. Dorje Chang Buddha III led disciples to release captive lives, proclaiming it the day of releasing lives. Since then, Buddhist disciples have named the day as the Buddha-Stipulated Day of Releasing Lives. Buddhists worldwide shall not only release captive lives whenever and wherever possible, but also hold lives-releasing activities at their nearest locations on this day.

In an interview, the Abbot of the Hua Zang Si Temple, Ruzun Ruohui, said, “We don’t just release lives on a particular day or in a specific location. Instead, we must follow the teachings of Namo H.H. Dorje Chang Buddha III and Namo Shakyamuni Buddha. No matter where it is and when it is, if we see living beings in horrible fears and calamitous adversity, we must save them. Therefore, for any lives that are facing the urgent and terrible fear of going to be hurt or killed, we shall buy them out and release them into an environment that suits them, so as to let them regain the freedom and be free from fears. There is a phrase that says, ‘I love to see them live, and I dare not see them die.’ Based on our compassion and empathy, we want to endow living beings with happiness and rid them of sufferings.”

Regular event attendees, Mr. and Mrs. Uboldi from Las Vegas, have ventured to the Dharma Assembly several times to experience lives-releasing events. They understand the significance of the events and have experienced freeing the fish into the sea with their own hands, watching them swim away freely and feeling the Buddhist spirit of compassion. To Mr. and Mrs. Uboldi, the experience reveals the preciousness of life and freedom.

Ms. Yang, a local resident, said in the interview: “The World Buddhism Association Headquarters held the Dharma Assembly of Releasing Lives based on the principle of loving lives. They saved those fish that were otherwise going to be killed and let them be free again. We all know that Buddhas and Bodhisattvas love all living beings equally. Therefore, we must learn to have the compassion of Buddhas and Bodhisattvas. Through releasing captive lives, we can nurture our mind to love lives and abstain from the cruelty of killing or harming lives.”

The World Buddhism Association Headquarters is a non-profit religious organization in the U.S. which has many subsidiaries and branches. From Buddhist organizations and associations to Buddhism-learning academies, temples, Dharma centers, and Dharma-listening locations, the association maintains a presence around the globe. The association calls on its people to follow the regulations of local government when releasing lives. Persons releasing lives must pay attention and perform the act in a way which conforms to the Dharma teachings, focusing on perfection and doing no harm during the release. With extensive detail requiring careful consideration, it’s important to consider loving and protecting the interest of living beings. Avoid undesired effects that negate the meaning of releasing captive lives. 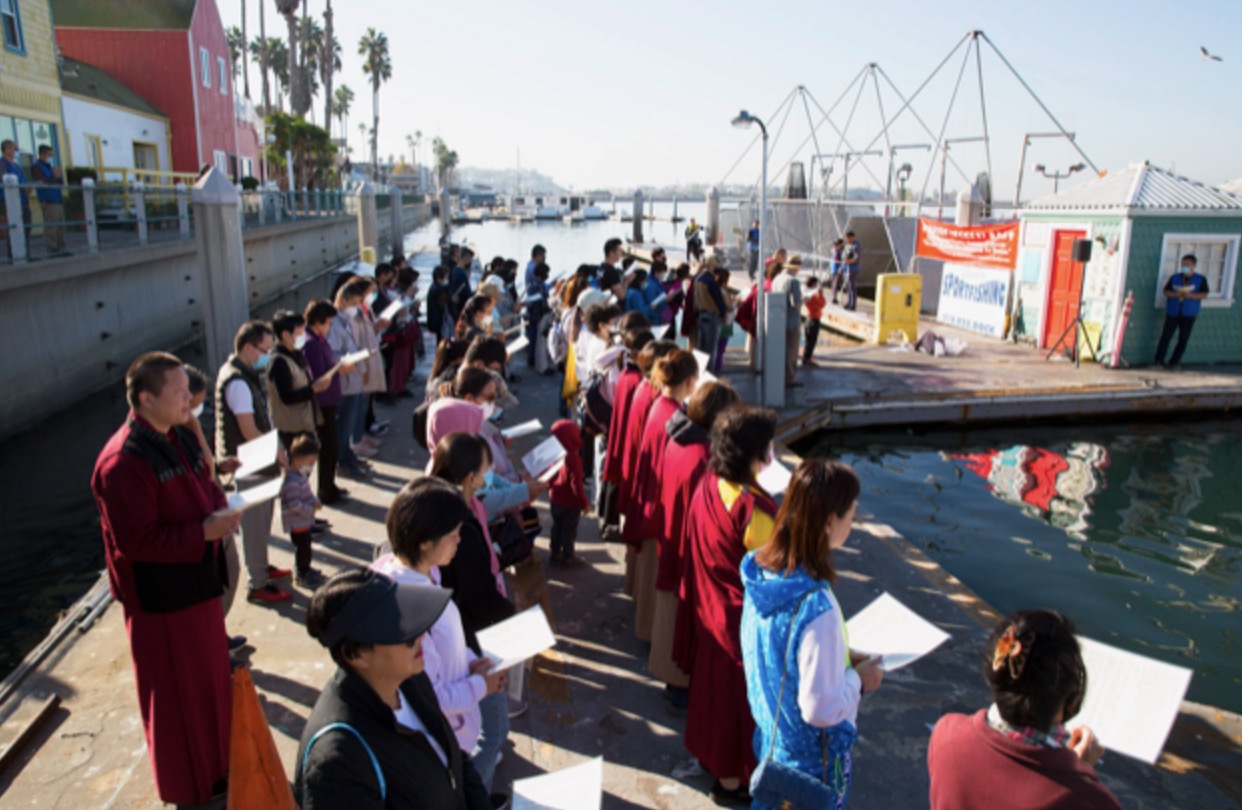 Professor Lin from Tokyo University of Foreign Studies, who came to this Dharma Assembly of Releasing Lives all the way from Japan, specifically pointed out: “I saw the event announcement when I was visiting Silicon Valley, so I came to take part in this Dharma Assembly. Releasing lives nowadays doesn’t mean that you could just buy some creatures and release them on the spot. You must consider if the creatures would affect the local eco-environment or negatively impact the original species. I read some reports of the lives-releasing activities held by the World Buddhism Association Headquarters before, where they provided explanations in this regard, so I was enticed at that time. I am happy that I ran into such an event in the U.S. this time. Releasing lives and respecting lives are noble deeds. In my opinion, this lives-releasing event is the true form of releasing lives, where the ocean fish were returned directly to the sea.”

Through Lives-Releasing Dharma Assembly events, the World Buddhism Association Headquarters seeks to do more than return these captive lives to Nature—they seek to develop people’s conviction that all lives are equal and that all people should have compassion and abstain from killing.

With the Dharma Assembly, the association returned the merit to all living beings, holding the hope that they shall be rid of suffering, obtain happiness, and have the opportunity to listen to authentic Buddha Dharma, perfecting fortune and wisdom, and leading to prosperity and peace throughout the world.